Manga fans have seen some fantastic new releases hit their shelves in the past month, and Rory from QBD Books Miranda, NSW, has shed some light on just a few of the highlights! Hell’s Paradise: Jigokuraku is a grisly look at a world made of contradictions. A beautiful art style depicts a cruel and ugly world. A man labelled “hollow” is driven by his emotions. And a beautiful paradise hides a deadly secret.

Gabimaru the Hollow is one of the most renowned ninja from his village of Iwagakure and is slated for execution. He is given one chance – find the Elixir of Immortality on an island named Hell’s Paradise, which no one has returned from alive, and he will be granted a full pardon for his crimes. With both his hands bound and an executioner breathing down his next, how will Gabimaru survive long enough to find the elixir and figure out the secret of the island?

Perfect for fans of Tokyo Ghoul and other similar manga, Hell’s Paradise: Jigokuraku is not for the faint of heart. The art style is perfect at capturing the desperate tone of the series and does not shy away from the more brutal displays it shows. The dynamic between the two main characters – the dry and acerbic Gabimaru and his handler/executioner Sagiri – promises to be interesting as well. The mystery of the island pulls you in, and as I finished the first volume, I found myself immediately wanting more, and wondering where the story would be heading next.

A must read for anyone looking for a great new manga from a promising new author, I cannot wait to see what the rest of the series has in store! Samurai 8: The Tale of Hachimaru

From the creator of Naruto, Masashi Kishimoto, and Akira Okubo, comes a fresh new tale about a young man and his quest to become a legendary Samurai. For people looking for a great new manga set in a unique an interesting world, Samurai 8 should be the first place to look.

Hachimaru longs to be a Samurai, and intergalactic warrior renowned for their honour and ability to travel between planets. Hachimaru has a strong spirit, and the skills to take down a Samurai, as shown in the first few pages. However, he is so frail that he can’t leave the house, and his greatest exploits only exist in the world of a game. After a series of events leads to him gaining a body befitting a Samurai, and he sets out to retrieve the 8 Samurai keys with his mentor Daruma.

While this may just seem like a typical shounen manga, do not be fooled. The world seems incredibly interesting, with every character being some sort of cyborg, and the main weapons being the souls of the characters formed into blades. This lends a lot of versatility to the setting and plots, with the ability for characters to change bodies already being shown, and the strength of characters heart being directly translated into fighting power. While a relatively small amount of the setting has been shown so far, with the promise of intergalactic travel in the future, the potential for more great worlds to explore is massive. Samurai 8 is definitely a manga to follow. 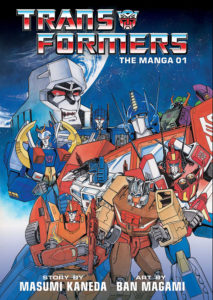 By Masumi Kaneda and Ban Magami

Chances are, even if you aren’t a fan of classic ’80s cartoon, you’ve heard of Transformers. These shapeshifting superstars were a worldwide sensation, and now they’ve made their leap into the world of manga in the form of this compilation volume, thanks to Masumi Kaneda and Ban Magami.

Follow the adventure of a typical Japanese child, Kenji, as he joins the Autobots in their fight against the Decepticons. Featuring some of the classic characters like Bumblebee, Megatron and Optimus Prime, as well as a series of illustrations for those who are interested in some classic ’80s art.

The manga series stays true to the heart of the show, with each chapter being like its own self-contained story. While this means there’s not a lot of overarching plot, it makes this manga perfect for reading in short bursts. The art style is very similar to the original show, and is perfect at recapturing the original feel of the series, cheesy as it may be. Even for people who do not know much about the Transformers (like me), that is not an issue for reading this manga, as it is easily understandable even for newcomers or more casual fans. Also, unlike some more popular manga, this is appropriate even for children, as it is simple enough to understand, has positive messaging, and even has a more durable cover than most manga. So, if you are looking for a good manga for kids, or even have just a slight interest in Transformers, this one is a good pick!