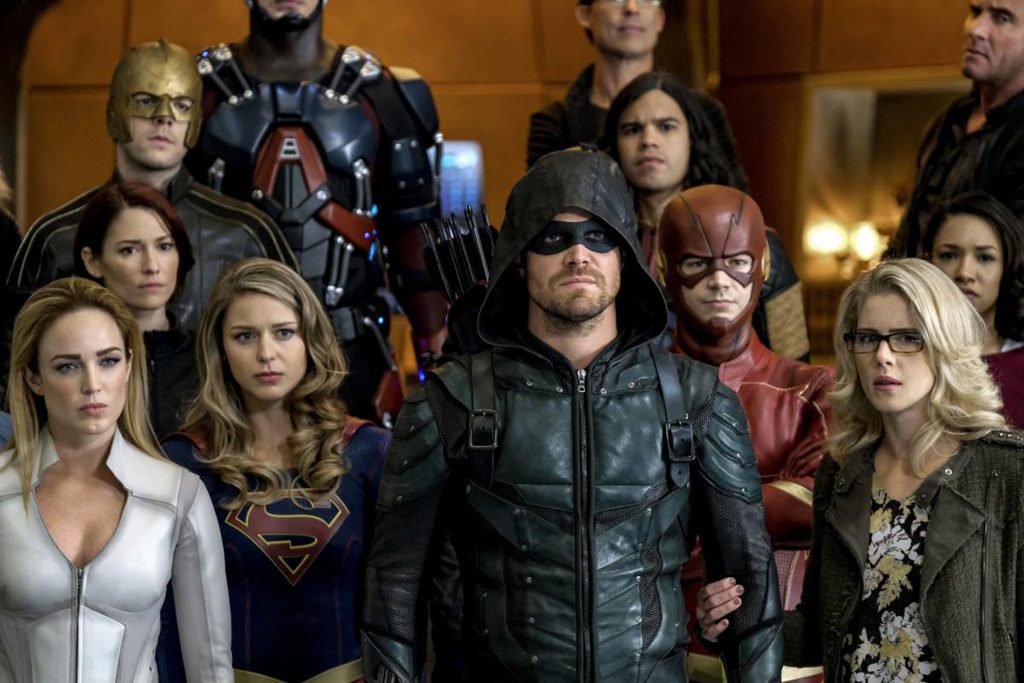 We Unpack The CW’s Epic Supergirl, Arrow, The Flash And Legends Of Tomorrow Crossover

The CW’s fourth annual Arrowverse crossover event, featuring Supergirl, Arrow, The Flash, and Legends Of Tomorrow, was a lot to digest.

The superhero quad-verse event, Crisis On Earth-X, plunged audiences into the 53th earth, a world that presented the reality of a future in which the Nazi regime won WWII.

The story follows our favourite heroes from Central City, Star City, National City and more in a battle for not only their own world but the freedom of all earths.

It kicks off with the impending nuptials between Barry Allen and Iris West, but the happiness doesn’t last (shock horror), as the celebrations are invaded by Nazis from Earth-X, along with the doppelgängers of the Green Arrow (The Führer), Supergirl (Overgirl) and Tommy Merlyn, who poses as Earth-X’s Prometheus.

The latest crossover allowed many of these incredible actors to show their versatility, as their doppelgänger counterparts were polar-opposites to their original characters. Notable performances from both Stephen Amell (Green Arrow) and Melissa Benoist (Supergirl) treated fans to a mind-blowing dynamic, not only amongst their newlywed Nazi-doubled selves but also across from their superhero counterparts within the same scene.

With so much action across the four episodes, there was plenty of Easter eggs scattered throughout and a lot of questions raised to be answered in each respective series down the track; writers used the crossover event to throw a stack of fuel on each show’s flame.

For example, Barry is greeted by a nervous and excited waiter on his big day. Could this potentially be Dawn Allen? Future daughter of Barry and Iris and one half of sibling duo The Tornado Twins? Jessica Parker Kennedy perfectly captures Barry’s enthusiasm and Iris’ sincerity in just 30 seconds and it will be interesting to see what the writers room has in store.

Flash fans would also be ecstatic by Tom Cavanagh’s return as the Reverse Flash, who has been running the operations of Earth-X. It was definitely refreshing, after seeing so many versions of Professor Harrison Wells, for Cavanagh to return to the man that started it all. His portrayal does not disappoint, being more sinister than ever and facing all our major heroes at some point during the crossover.

Understandably, four episodes were needed to cover all active CW shows, however, it is questionable whether some scenes were necessary towards the narrative progression. After all, the first major action scene only starts at the end of episode one and our heroes finally step foot on Earth-X in the last scene of episode two.

Nevertheless, these crossovers are a rarity, especially one on this scale with such a wealth of character material. The writers achieved a balance of both relationship developments between characters as well as main plot development.

Crisis On Earth-X presented an action-packed storyline that fans are sure to love, with notable threads for each show to continue upon.