Interest in The Elder Scrolls games has piqued recently from the acquisition of Bethesda Games Studios by Microsoft, despite the fact we haven’t received any new info on The Elder Scrolls VI since its teaser other than ‘It’s a long way from release!’ So, while we wait for the sixth game, let’s look at six of the most annoying, infuriating or downright terrifying enemies in the main Elder Scrolls games. One of the most iconic enemies from Skyrim, Giants pack a punch equal to their size. Even if you’re a high-level player, giants have the chance to KO you thanks to a physics glitch that causes their club slam to launch players hundreds of metres into the air like you’re Team Rocket from Pokémon ­— equal parts hilarious and infuriating. Always save your game before taking on a Giant. These piranha-like fish have appeared across most of the Elder Scrolls games. They’re not particularly strong but they’re aggressive and attack in packs like hungry little swimming wolves. The difficult part of fighting them comes from the fact they’re so small, meaning if you’re a new player that doesn’t have anything capable of area-of-effect damage, you’d better stay away from water. They don’t even need to attack to annoy you; as being near a water source with even a single one will prevent you from fast travelling.

They seemed particularly pervasive in Morrowind. I can’t remember a time where I was able to go into the ocean without encountering Slaughterfish. It honestly felt like they were waiting for me. The most egregious encounter I had was in the starting area. I was swimming in a few metres from shore when they attacked me. I flailed my dagger in the water, not realising a kind guard had swum out to help me. My dagger scratched the guard. The guard killed me. 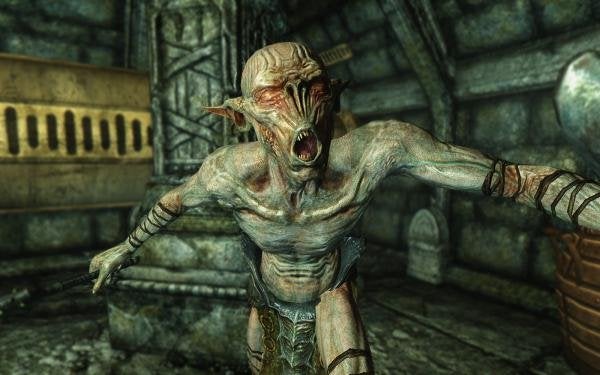 These blind, devolved elves are the creepiest enemies in Skyrim. Their backstory is admittedly tragic, having been tricked into slavery and turned blind by the Dwarves. As such, the Falmer have become aggressive to anyone from the surface, hunting by sound rather than sight and are often flanked by their Chaurus, those giant chittering bugs acting like the Falmer’s guard dogs. Any sympathy is quickly lost when facing those two together. You wouldn’t think these beautiful glowy-bois would be so horrifically powerful for a standard monster in Oblivion. You’ll walk up to one thinking it’s a big friendly firefly when suddenly your stats are lowered and your health absorbed. All while turning invisible between attacks and healing itself. They’re a nightmare for low-level players, especially if you only have normal weapons, as regular metals don’t even affect wisps because they’re basically glowing ghosts out to ruin evening strolls.

Worst of all is if you try to run away from them, they’ll chase you down. Forever. They’re programmed to never forgive. And you don’t need those people in your life. Technically not ‘enemies’ but there’s only so many times you can hear, “I used to be an adventurer like you. Then I took an arrow in the knee.”

If you’ve ever played The Elder Scrolls III: Morrowind, you knew this would be number one. Even if you disagree with the other enemies on this list, Cliff Racers are objectively the worst. They’re the iconic Morrowind monster for the sheer amount that will peck and scream at you.

It’s been more than fifteen years, but I still vividly remember my first encounter. I’d left Seyda Neen and on the road to Balmora, walking up a hill when that awful, high-pitched wail descended on me. I was confused about where this irritating thing had come from and what it was. A dinosaur-seagull, a bat-rat hybrid, or just a rotting pancake that had learnt to fly? All I knew was I hated it. I immediately contracted some disease from its screaming beak as it swooped down, and suddenly a second cliff racer joined for double the screeching. I cut my losses and ran away, and I didn’t stop until reaching the safety of Balmora.

You might think, ‘Well just avoid cliffs and hills if they’re that bad.’ Except no. Cliff Racers infested every corner of Morrowind; the ‘Cliff’ in their name is a total lie. That’s what makes them so bad; they’re everywhere, there’s heaps of them, and they will all at once hunt you down whenever you’re wandering the wilderness. And the blighted ones were even worse, as they’re equally annoying but actually powerful.

Cliff Racers are so bad that Bethesda has basically written them out of the series, having been exterminated on the island of Vvardenfell, the main island of Morrowind, by a dark elf named Jiub. Cliff Racers still technically exist on the Morrowind mainland, but who wants to go there anyway? Not me (because of the Cliff Racers).

Jiub is the same dark elf who wakes the player at the beginning of Morrowind, and you can find him later in the Soul Cairn, during the Dawnguard expansion for Skyrim. Jiub was rightfully named a saint by the people of Vvardenfell, even having a festival in his honour. I don’t care if you’re the Dragonborn, Jiub is the true hero of The Elder Scrolls.

Of course, Elder Scrolls: Online (ESO) is a prequel to the main series, set in the dark times before Saint Jiub. In ESO’s Morrowind expansion you can go to Vvardenfell and thus, still encounter Cliff Racers there. Thankfully, they’re non-combative. Unfortunately, that also means you can’t silence their awful squawks. But that’s Jiub’s destiny.