The following review contains spoilers for Chapter 1 of Life is Strange: True Colors.

Life is Strange: True Colors follows Alex Chen, fresh out of foster care and looking to start a new life in Haven Springs with her long-lost brother, Gabe, alongside his girlfriend, Charlotte; Charlotte’s son, Ethan; and Steph, who players may remember from Before the Storm, returning as Gabe’s friend and one of Alex’s potential romances. But Alex’s dreams are quickly shattered when Gabe dies in an apparent accident, and with her ability to see and share in people’s true emotions, she soon realises things in Haven aren’t what they appear to be on the surface. It’s a more character and emotion driven story, and this direction works well for True Colors. Though the characters in previous games had depth, the limitations of the graphics made interactions feel stilted and often reminded me that I was playing a game. Thankfully, the new high-fidelity character models and animation of True Colors work wonders, and makes it feel like a ‘next-gen’ leap for the series. Everyone looks and moves far more naturally, creating a more immersive experience, and I found myself forming stronger connections with Alex and the residents of Haven.

Those connections are also owed to strong dialogue and character development. Alex has so much depth to her backstory and worldview, with a lot of her hardships clear when reading her text messages and journal entries throughout the game. Even knowing that Gabe dies early on in the game, his death is still shocking and hits hard thanks to the time invested into fleshing out each individual character and Gabe’s relationship with them, particularly Alex. True Colors is also well paced, allowing enough time for Alex, and the player, to really feel that loss before moving the story forward. Even afterwards, Gabe’s absence hangs heavy whenever he’s mentioned or remembered, and I still grieved for Alex’s lost relationship with him as the credits started to roll. It’s the strongest exploration of grief, and the complex emotions that accompany it, that I’ve seen in recent memory. True Colours’ plot doesn’t quite reach the stakes of the previous Life is Strange games, with Max choosing between saving the person she loves most or stopping a freak storm destroying her town, or the political and racial themes surrounding Sean and Daniel’s journey to find safety. But True Colors’ narrative has a more personal weight to it, as Alex pursues justice for Gabe and condemnation of those responsible for the ‘accident’.

Even though True Colors’ story and choices seem smaller in scope than previous titles, they still maintain the same impact, and a few of them had me groaning with indecision. There’s one choice in particular I made regarding Charlotte that I feel awful about and is one of my biggest gaming regrets. Sure, I can redo it on another playthrough, but I’ll always remember the consequences of my first choice. The gameplay is similar to previous entries in the franchise, with most time spent talking to people or inspecting objects. But it wouldn’t be Life is Strange without a supernatural power, and Alex’s is empathy. Alex can see an aura around people feeling an intense emotion, allowing her to feel their rage, fear, sadness or joy, and to hear their thoughts tied to that emotion. Even objects that were present during an emotional experience hold a memory of it. It adds a new layer to the franchise’s formula, providing further insight into characters and allowing players greater connection to them.

Most of the key scenes involve Alex fully delving into someone’s trauma; changing the environment to reflect the emotion, such as Steph’s sadness turning a sunny day into rain or Ethan’s fear of falling giving Alex the image of a monster’s sharp jaws in a ravine below them. There are still occasional minigames and twists on the gameplay to mix things up, with the most ingenious twist in Chapter 3, when most of Alex’s friends participate in a LARP, turning True Colors into a rudimentary RPG, complete with turn-based battles and item gathering. The way that the LARP interacts with Alex’s power is one of the most jaw-dropping and awe-inspiring moments in any Life is Strange game and had me laughing with glee.

The design of Haven Springs is gorgeous. The instant Alex arrives in Haven, she’s greeted by beautiful snow-capped mountains in the distance, with the river winding down through vibrant trees to the town. It’s a place you’d want to visit or even live in. Thankfully, a substantial amount of the game is spent outside exploring the town, and it never loses its charm. One issue worth noting, however, is that performance takes a persistent hit whenever you explore the outdoors; turns out beauty is particularly demanding. 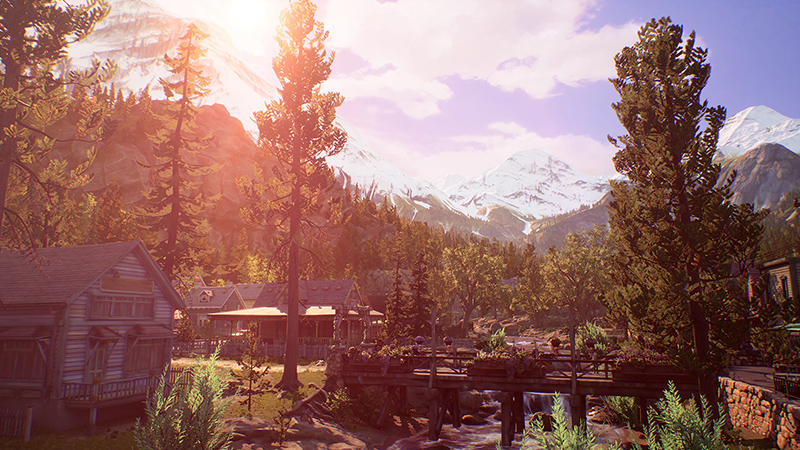 True Colors’ soundtrack is brilliant as is usual for the series. There’s a great selection of licensed tracks, but the original score is composed by Australian indie folk legends, Angus & Julia Stone. The songs are beautiful and often heartbreaking within the context of the game, and are worth listening to even if you never play. My biggest criticism of the game is the lack of background music while exploring much of Haven because I did not want to stop listening to those tunes.

Life is Strange has always been a series that doesn’t shy away from shocking moments or difficult topics, and while True Colors’ story might not feel as big, it doesn’t pull any punches. The improved visuals and animations allow the characters to be fully realised and elevate this entry above its predecessors, and Alex’s empath power provides even greater depth to its world. True Colors is a vibrant, heartbreaking and joyful experience, and a must play if you’re a fan of the previous Life is Strange games or Tell Me Why.

Life is Strange: True Colors is available now on PC, Playstation and Xbox, and is coming soon to Switch.

READ MORE: WHY YOU NEED TO GET BEHIND ‘LIFE IS STRANGE: TRUE COLORS’