Fans of Supa-Star Zach McGowan were thrown into a state of shock last week, as the fate of the actor’s fresh role as Justin on The Walking Dead was thrown into uncertainty via a cliffhanger ending.

“You know the game,” he jokes, unable to reveal anything about what’s to come. “There’s nothing that I can really ever say other than keep watching.”

As a fan of the show himself, McGowan said it’s a “pleasure to get to hang with the gang”.

It’s not surprising he’s accrued such a dedicated fan base, having firmly embedded himself within pop culture in recent year as Anton Ivanov in Agents of S.H.I.E.L.D., King Roan in The 100 and more, but it’s playing Captain Charles Vane in Black Sails that he favours the most. “That was just something special,” McGowan says. “It’s rare that I do something that I get really passionate about where I totally fall into the work head over heels, and that was one of those pieces.’ 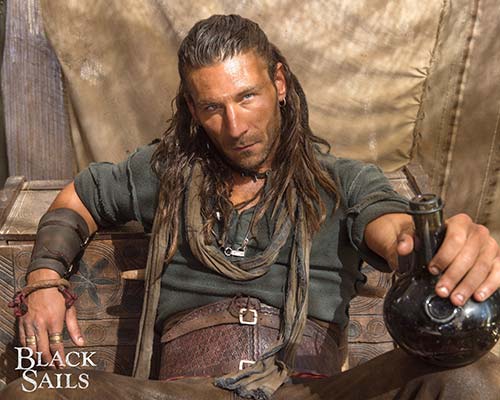 “I think probably more than anything it was just that he was around from the beginning. It was the only show I’ve ever done where he was in the first episode and throughout until he died.’

“In that way, you’ve got a little more stewardship over it than you do in other situations where obviously the story is already up and running, and you’re kind of jumping in and trying to catch up.”

Charles Vane is a far cry from his stint on Shameless, showcasing his comedy chops along the way, but he also views Jody on the Showtime hit with the same kind of affections. “I loved Jody… he was the man! He’s still kicking around, alive somewhere in that universe down in Arizona with Karen, you know. Somewhere.”

And, because that character didn’t suffer a brutal and untimely demise like some of his other characters, it’s a role he might even be able to reprise one day.

“Every show is about something specific and if you’re coming in as a peripheral character it’s never going to be just about your story line. So I think you just always hope to get a good run on your storyline, and something that will leave a mark on the show.”

He’ll have every opportunity to leave his mark with upcoming action/ adventure blockbuster The Scorpion King: Book of Souls, starring as the film’s titular character. “The problem I have is, I do all these heavy projects with heavy characters. I have two kids; I have a seven year old and I have a five year old, and I’ve been dying to do something that they can come and see,” he explains.

“I’m not sure if they can watch all of it just yet, but it’s PG13, which is the first project I’ll be doing that’s like that. It’s a new take on what you’ve seen from that character in the past.’

“We’re looking for the Book of Souls and obviously there’s a lot of fun that happens along the way. It’s a cool character to play. Basically, when you meet [the Scorpion King], he’s done being a warrior and done fighting and he wants to follow a peaceful life. But the trouble comes to him, and he is forced into action.” There’ll be plenty to talk when McGowan touches down in Australia for Supanova Adelaide and Brisbane next month. “That’s one on the most special things about the fandom; you get to actually meet them and go around the world and see them, which is very special,” he tells.

“There are people who are like, ‘Oh, isn’t it weird you get off a plane somewhere, you don’t know anyone?” I’m like, ‘Yeah, it’s actually great; there’s all these fans I just haven’t met yet and they’re everywhere.’

“Some people might be into Agents of S.H.I.E.L.D. or Black Sails or The 100 or a host of different shows, but I think the consistent thing is that for some reason, for whatever reason it is, people like what it is I do. So I’ll just try to keep doing it for everyone.”

It wasn’t always an easy slog, though, with McGowan revisiting a chance encounter on a New York train back in the day whenever he’s in need of inspiration. “I was going over my lines on the train and Philip Seymour Hoffman happened to be sitting next to me and I looked up and he was looking over my shoulder at what I was reading.’

“I was like, ‘Oh my God, Philip Seymour Hoffman, I’m such a big fan. I’ve loved you ever since Scent of a Woman. Any advice for a young actor?’

“Then, it’ll be a while since you did something brilliant that caught their eye and they’ll tell you that you’re stupid and you should quit again. I’ve taken that to mean stick to your values all the way, and to know that it’s up and down, but that there is a great life to be had as a performer or as a member in the entertainment industry and making movies and such. I’m all for it. Go and shine that light.”

You can catch Zach McGowan at Supanova Comic Con & Gaming this November.