Nerf began life as a toy company in the 1960s, but it wasn’t until the release of the first Nerf Blasters in the ’90s that the company truly took off. Since then, Nerf has created multiple new products, series and spin-offs, often including movie tie-ins.

From Deadpool to Poe Dameron, Nerf has a star-studded history with tie-ins – these are just a few of our favourite geeky releases in recent history.

This special purple edition of the Big Bad Bow was released as a tie-in for the first Avengers film in 2012 and could fire its foam arrows up to 35 feet. In true Hawkeye fashion, the bow had a targeting scope that allowed for more accuracy and could be collapsed for easy transport. This wrist-mounted blaster is designed to replicate Captain America’s iconic shield and features an easy-to-access rapid-fire trigger, as well as a blaster failsafe to prevent dry firing. The design of this blaster is stylish and simple, and with a range of up to 20 feet, there’s loads of devilish fun to be had with it.

This multi-fire Nerf blaster is brilliant because it perfectly recreates Star-Lord’s iconic hand blasters from the Guardians Of The Galaxy films. Featuring four barrels, air restrictors and two triggers, this blaster is simply gorgeous and would go well with any Star-Lord cosplay. 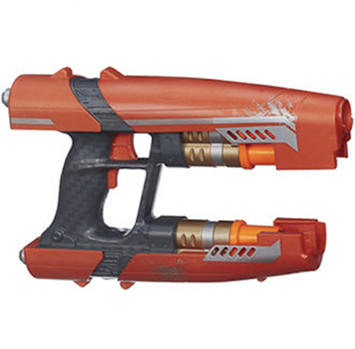 Nerf’s Strike Gauntlet series differs greatly from their main blaster series, as it features a range of wrist-mounted gloves designed to shoot darts out from its main barrel. This Black Panther tie-in takes the form of a panther, with the priming handle located to the left for easier rapid fire. These two blasters are re-painted releases of the original Kronos and Apollo RIVAL blasters with a Deadpool-themed twist. Both blasters feature hefty magazines of high impact rounds, aiming sights, a priming indicator and a tactical rail to allow for high accuracy shots. With a chimichanga in your left hand and the Kronos or Apollo in your right, you’re sure to be in for some wild, bad guy-shooting adventures.