A Celebration Of Ginny Weasley

To help celebrate our magical November Supa-Star Bonnie Wright, we thought we’d take a look at Ginevra Weasley (better known as Ginny), in the Harry Potter films, and why Ginny is one of the greatest witches to grace the page, screen, and stage.

SHE’S A PROFICIENT AND POWERFUL WITCH

Ginny has always been one of the more talented witches in the series, particularly during her school years. J.K. Rowling has stated one of the reasons Ginny is gifted is due to the fact she was a seventh child and the first female Weasley born in generations, which ties into the superstition of the seventh daughter of a seventh daughter.

Ginny was proficient at charms and curses, capable of holding her own against Death Eaters, including helping Hermione and Luna Lovegood to duel Bellatrix Lestrange. She was even able to cast a full-bodied Patronus, taking the form of a horse and is considered an extremely advanced spell. Plus, Ginny’s Bat-Bogey hex, which turns snot into flying bats, was so masterful that Professor Slughorn asked her to join his exclusive Slug Club on that alone. Clearly, she has a potential for mischief that could rival her brothers.

SHE ISN’T FAZED BY HER BROTHERS 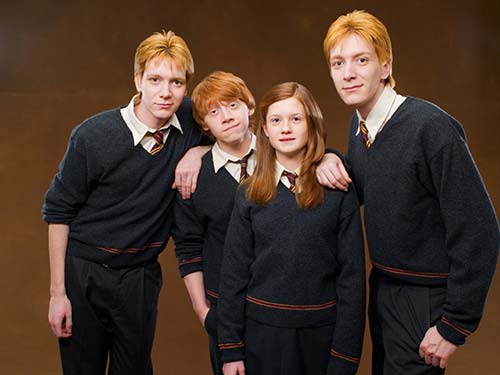 It can be hard being the youngest child in a family; especially if you have six elder siblings and you’re the only daughter. But Ginny always stood her ground, especially against Fred, George, and of course, Ron. As her closest brothers in terms of age, she often clashed with them, whether they were making fun of other people for no good reason, or just criticising her relationships, Ginny was never afraid to call them out, and was an element of her personality that many of her fans related to and loved her for. Just because they’re older, doesn’t make them wiser!

SHE CAME UP WITH DUMBLEDORE’S ARMY

Well, she came up with the name, one-upping Harry’s then-girlfriend Cho Chang, who had suggested the ‘Defense Association’. But with Harry’s absence during the events of The Deathly Hallows, she secretly reorganised and co-led Dumbledore’s Army, along with Luna and Neville Longbottom, and was instrumental in training the group of students to defend Hogwarts against Voldemort and his Death Eaters later that year.

SHE’S SO GOOD AT QUIDDITCH THAT SHE WENT PRO As a child, Ginny would often sneak out to fly broomsticks, despite being forbidden as she was considered too young by her family. Yet, despite being self-taught, she became quite adept, even before she started at Hogwarts, and soon became a standout with the broom. So, it shouldn’t be a surprise that Ginny’s love for flying earned her a spot as a chaser for Gryffindor’s Quidditch team and even took Harry’s spot as seeker during his absence.

Ginny continued flying after graduating from Hogwarts, earning a spot with the Holyhead Harpies, before retiring from the sport to start her family. She eventually went on to write for the Daily Prophet as their Quidditch Correspondent, and by the events of The Cursed Child in 2020, she had become the wizarding paper’s Sports Editor. J.K. Rowling planned from the beginning for Ginny and Harry to end up together and be equals, and as such, they have a lot in common. They both are competent spellcasters, talented Quidditch players, and suffered similar trauma, having lost family to He-Who-Must-Not-Be-Named and both even having been possessed by him. Which we all know is a sign of true romantic compatibility.

Their marriage and family life are expanded within The Cursed Child, showing them as still deeply in love, as well as loving parents, but still working through the ordinary struggles of marriage and parenting. There are some things magic can’t instantly fix, but that true love can always overcome.

BONNIE WRIGHT IS A TRUE GRYFFINDOR

If there was ever any doubt that Wright was right to portray Ginny in the films, beyond her looks and talent, it was confirmed by the Pottermore sorting quiz that she has the qualities of a true Gryffindor! Not even her on-screen brother, Rupert Grint, could match that, as he’s a Hufflepuff in reality. But it’s no wonder Bonnie fits into the crimson house, as she has said that she related to the idea that Ginny was a warrior.