Aquaman Is Better Than Your Favourite Superhero

Listen up, landlubbers. We just checked the time, and it’s Hard Facts O’clock. For too long people have slept on Aquaman, and the buck stops here. With Jason Momoa about to hit the big screen again as Atlantean royalty, we thought we’d take a closer look at the character of Aquaman and what we’ve learnt about him over the decades through his countless comic book appearances.

AQUAMAN IS A KING

With a capital ‘K’. Aquaman is the sovereign ruler of an entire kingdom. A whole kingdom. And this isn’t some ceremonial title, he actually gets stuff done. He’s like a super-powered politician you’d want to have around. When he’s not busy improving the lives of his constituents through governing Atlantis, he’s defending them from land and sea threats, sometimes completely solo. Running a kingdom isn’t easy, though. Compare that to Batman, who can’t even run his own company; he needs a butler to tie his own shoelaces! Who ties Aquaman’s shoelaces? Nobody.

Aquaman is royally loaded with all the wonders of the Atlantean treasury. You think Bruce Wayne’s got paper? Aquaman’s got bread. Soggy, underwater bread, but bread nonetheless. He’s rockin’ gold chains, a gold trident, he’s bedazzled with jewels and more. We know Aquaman’s got superhuman strength, stamina, durability, and reflexes superior to even Deathstroke, but his Atlantean physiology allows him to breathe underwater, and on land, and his Royal blood means he can stay topside longer than the average Atlantean, and submerge deeper than all his brethren. He’s not just superhuman, he’s also super-Atlantean.

He’s got superhuman vision, hearing and smell. He’s been launched into orbit, fell back down, landed on top of a sea monster, and walked it off. He’s submerged himself in lava and emerged unscathed. He’s taken an RPG to the face with nary a scratch. He’s gone toe to toe with Superman, Wonder Woman, and Hercules, and he once pushed an entire continent himself.

In addition, saying he can talk to fish might be the understatement of the year. Aquaman’s telepathy extends far beyond simply compelling aquatic animals to do his bidding. He can do mind-to-mind communication with people; he can probe people’s brains, dominate their minds entirely, and more.

It is a fact of life that the range on Aquaman’s trident is absolutely bonkers. That thing will hit you even if you’re standing in a different postal code. Dread it, run from it, there is no escaping it. 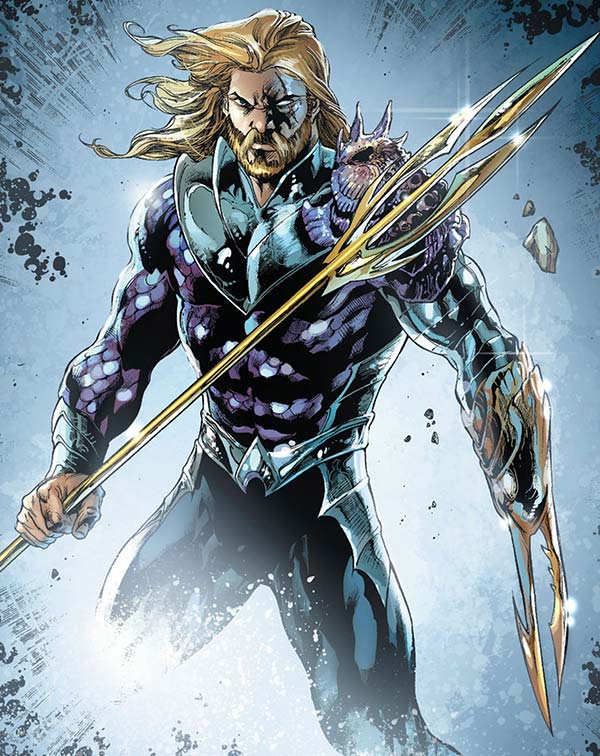 Aquaman is packing two of the most powerful weapons in the DC Universe. The Trident of Neptune, and the Trident of Poseidon. Neptune can manipulate bodies of water and the entire ocean, summoning whirlpools, tidal waves, and geysers. It can conjure up water outta nowhere, which is pretty handy when you need it to survive, and most of your enemies die when they have too much of it. What about magical powers? It makes force fields, good for defence; it shoots lightning bolts, good for offence.

Meanwhile, the Fork of Poseidon is unbreakable – it’s got a lifetime warranty. Can it open gateways to other dimensions? It absolutely can. This Trident creates water elementals and high-speed vehicles made of water. It creates fog and storms and summons waves, it makes shields and shoots lightning, it manipulates and conjures water, but it also creates earthquakes. Aquaman has the literal power to move the Earth, and all the continents, at his will.

Only a true King can rock a hook hand and make it look effortless, and that’s Aquaman. Yes, in addition to looking stylish, Aquaman’s hook hand was built by STAR Labs, and came with a slew of sick bells and whistles. Its primary weapon, the hook, was retractable, to be replaced with a prosthetic hand. It could be launched as well, to poke people, but also entangle them in the cable. It carried a powerful electric charge, could spin at high speeds to be used as a drill, and was generally just badass. But his Atlantean second hand is even cooler. Made of an ancient, liquid-metal alloy, it changed shape in response to Aquaman’s will, transforming into shields and various weapons.